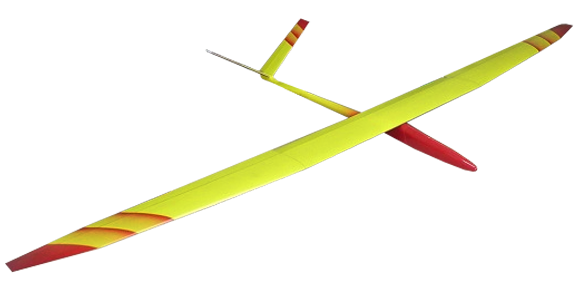 The Miraj is a glider with exceptional flying qualities. It is above all intended for experienced pilots. Indeed, it may well be healthy and relatively easy to pilot, it requires particular rigor in its assembly and radio installation. We must therefore not neglect the advice in the manual, such as the formwork of the fins edges with resin loaded with microballoon, the rigor of the controls and the precision of the servos (it is recommended to use servos without play, which most metal microphones do not). The servos I use are the HS85 BB Hitech for the ailerons and the stab, and an HS 605 Power (Hitech 5.5 Kg) for the central flap.

The Miraj is a glider designed to be piloted 4 axes, like all Aeromod models; piloting the 4th axis is a learning experience in its own right and is particularly enriching. That said, the 4th axis is not imperative and one or more flap positions associated with the depth-to-flap mixing already makes it possible to draw the main potential from it.

The wing of the Miraj consists of a very dense polystyrene core on which is molded a laminate composed of glass fibers and carbon. T
he surface fabric is a 160 gram glass positioned at 45 degrees, so it contributes to torsional rigidity. The rest consists of 80 gram UD carbon layers. It weighs 800 to 850 grams out of the mold. The laminate thickness is modest but the wing is particularly stiff. The wing is in three parts, the wing key sleeves are placed in the molding, the ailerons are cut and the passage of the servo wires as well as the mounting brackets of these have been prepared. 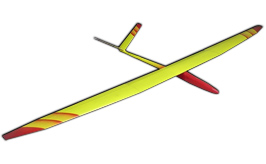 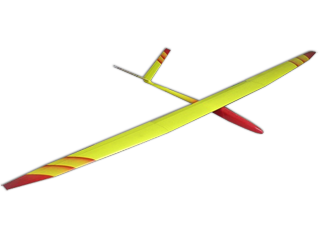 We cannot guarantee that the shops listed below do sell the MiraJ in particular but at least we know they do distribute AEROMOD.