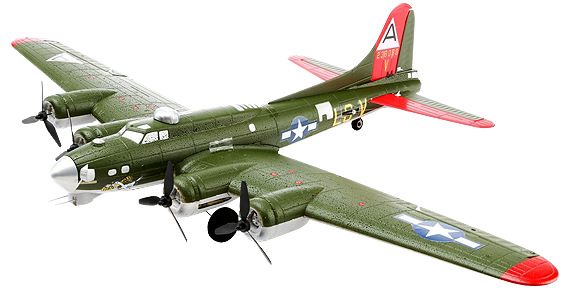 Conceived in the mid-1930s by Boeing Aircraft Company, the B-17 aircraft not only demonstrated capabilities beyond expectations over Europe, around the globe it went on to deliver military service well into the 1960s. She was dubbed the "Flying Fortress" for her incredible defensive firepower and is credited with downing 23 enemy aircraft per 1,000 raids that devastated European targets in daylight raids with 640,036 tons of bombs. Now known as the most famous bomber of WWII, heroic crew members loved the B-17 for her ability to withstand extensive combat damage and still return home safely.

The E-flite® UMX™ B-17G Flying Fortress model is an ultra micro marvel. Not only is it the first ultra micro RC model of the famous WWII bomber, it includes innovative AS3X® technology that makes flying more fun. Built into the Spektrum™ DSMX® receiver, AS3X technology has been specially tuned to combat the effects of wind and turbulence so you get the kind of locked-in handling that’s comparable to an expertly tuned airplane that’s much larger. With four motors, three-blade propellers and full four-channel control plus an abundant amount of scale detail, it’s a replica you can fly almost anywhere.

Whether you’re an intermediate park pilot looking for your first RC multi-engine experience or a scale pilot looking for a unique replica that can be flown anywhere, the E-flite UMX B-17G Flying Fortress is ideal. All you need to start flying today is your favorite 4+ channel aircraft transmitter with Spektrum 2.4GHz DSM2®/DSMX technology. 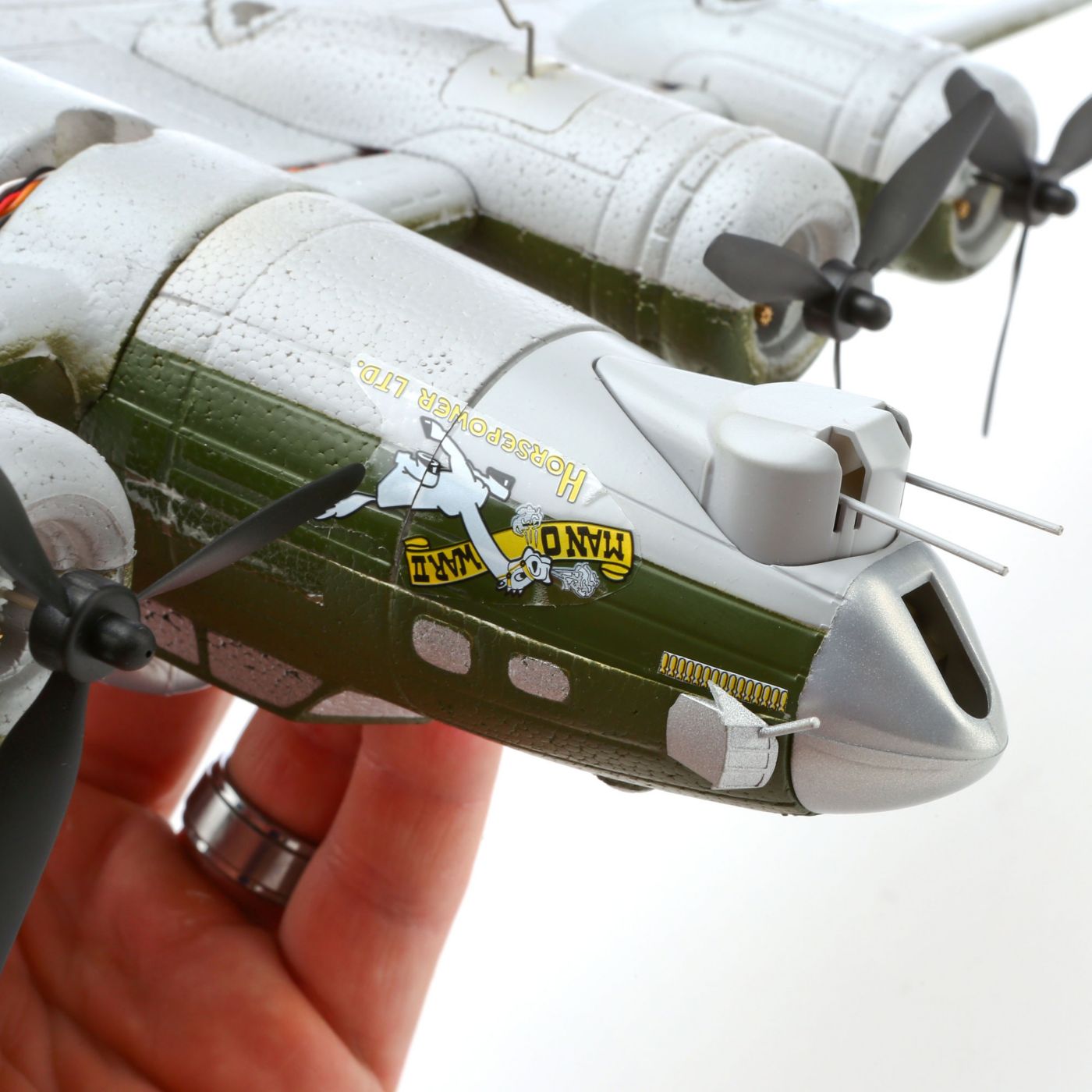 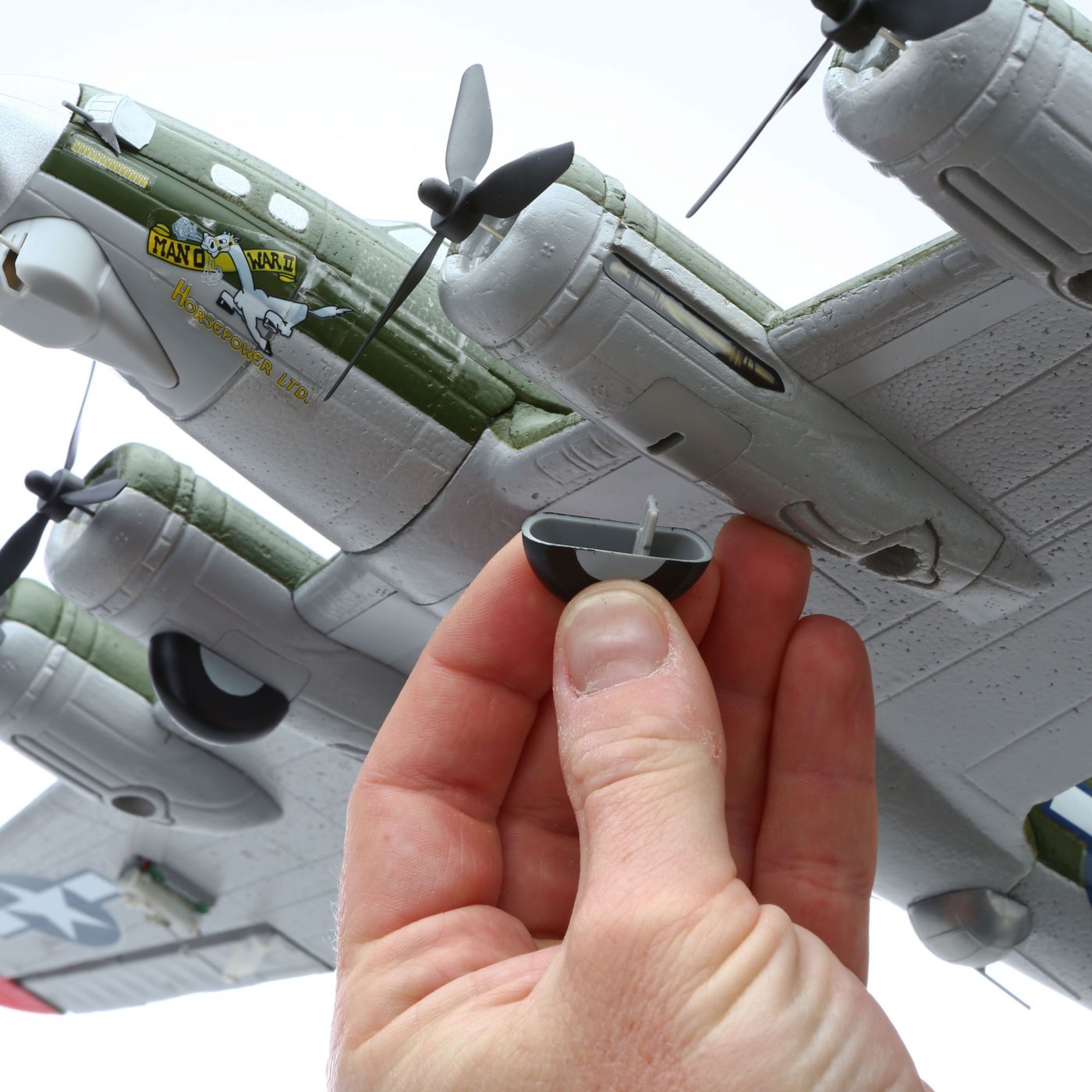 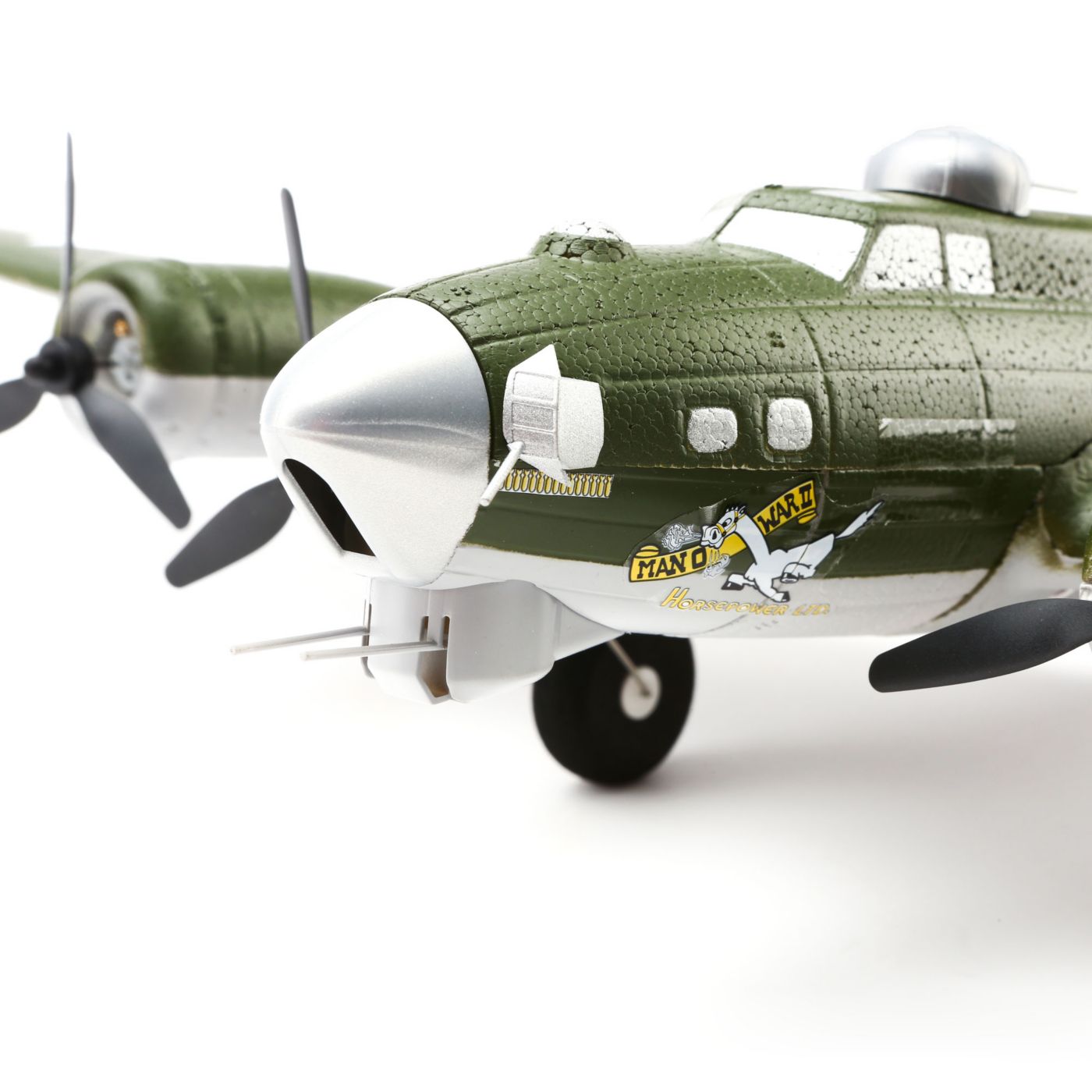 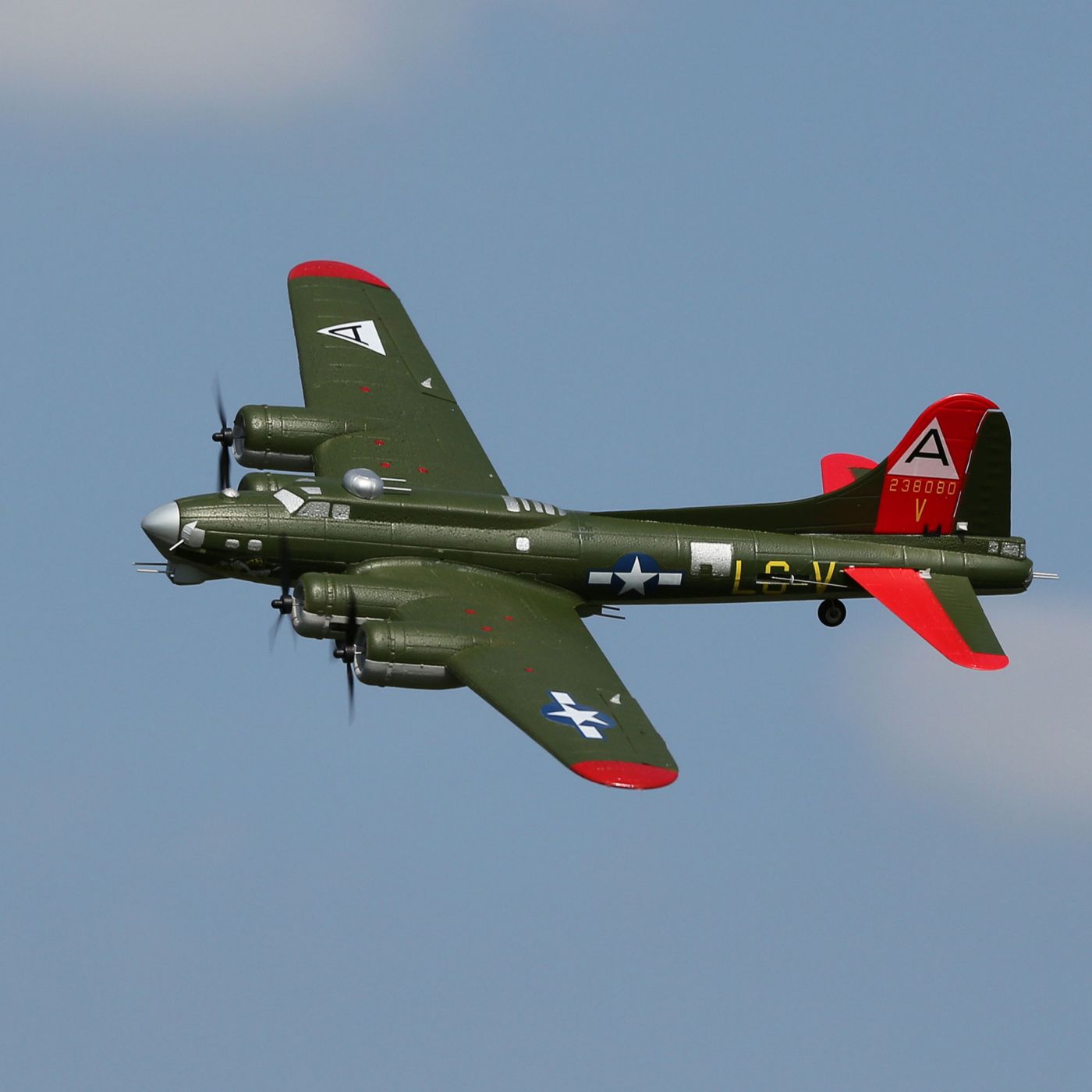 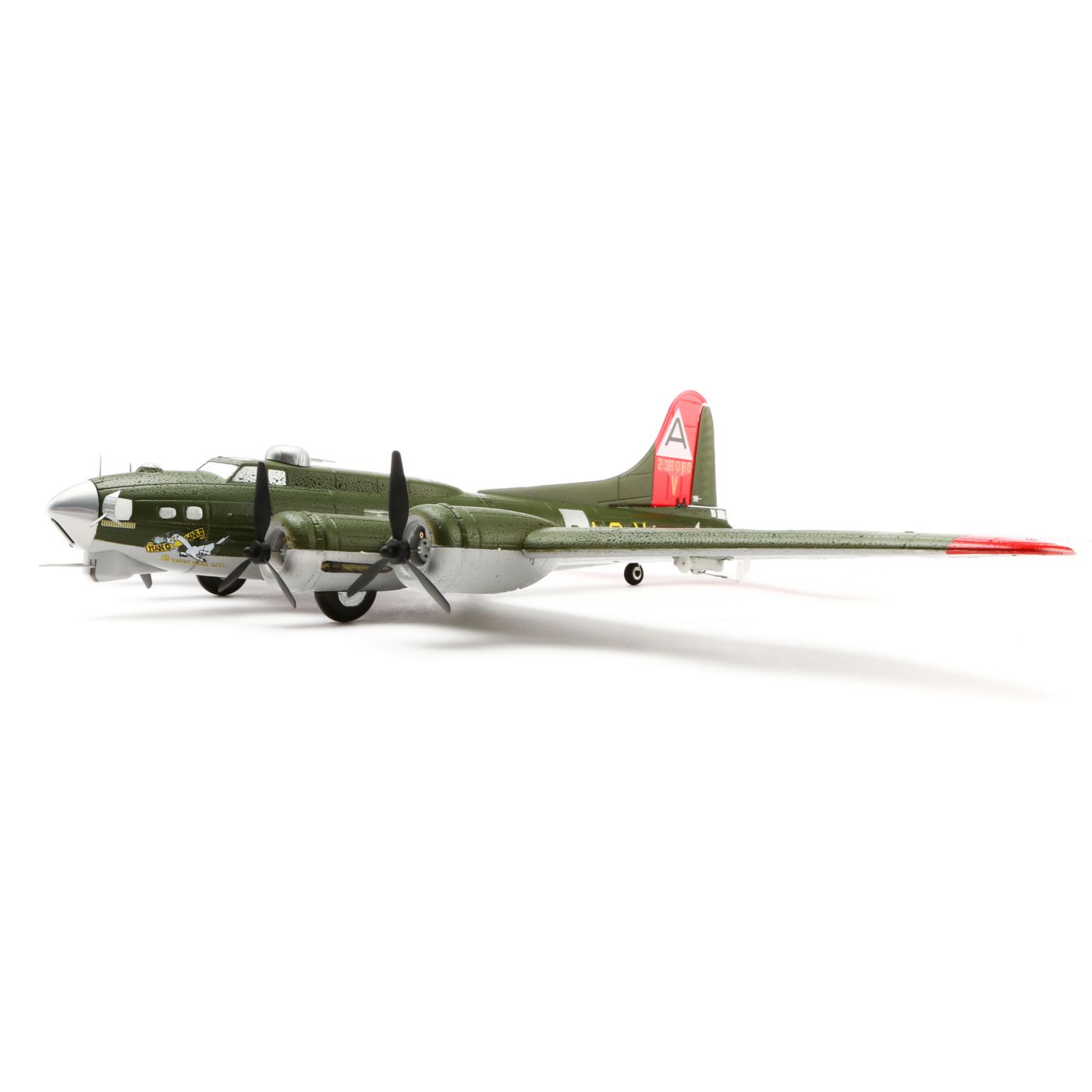 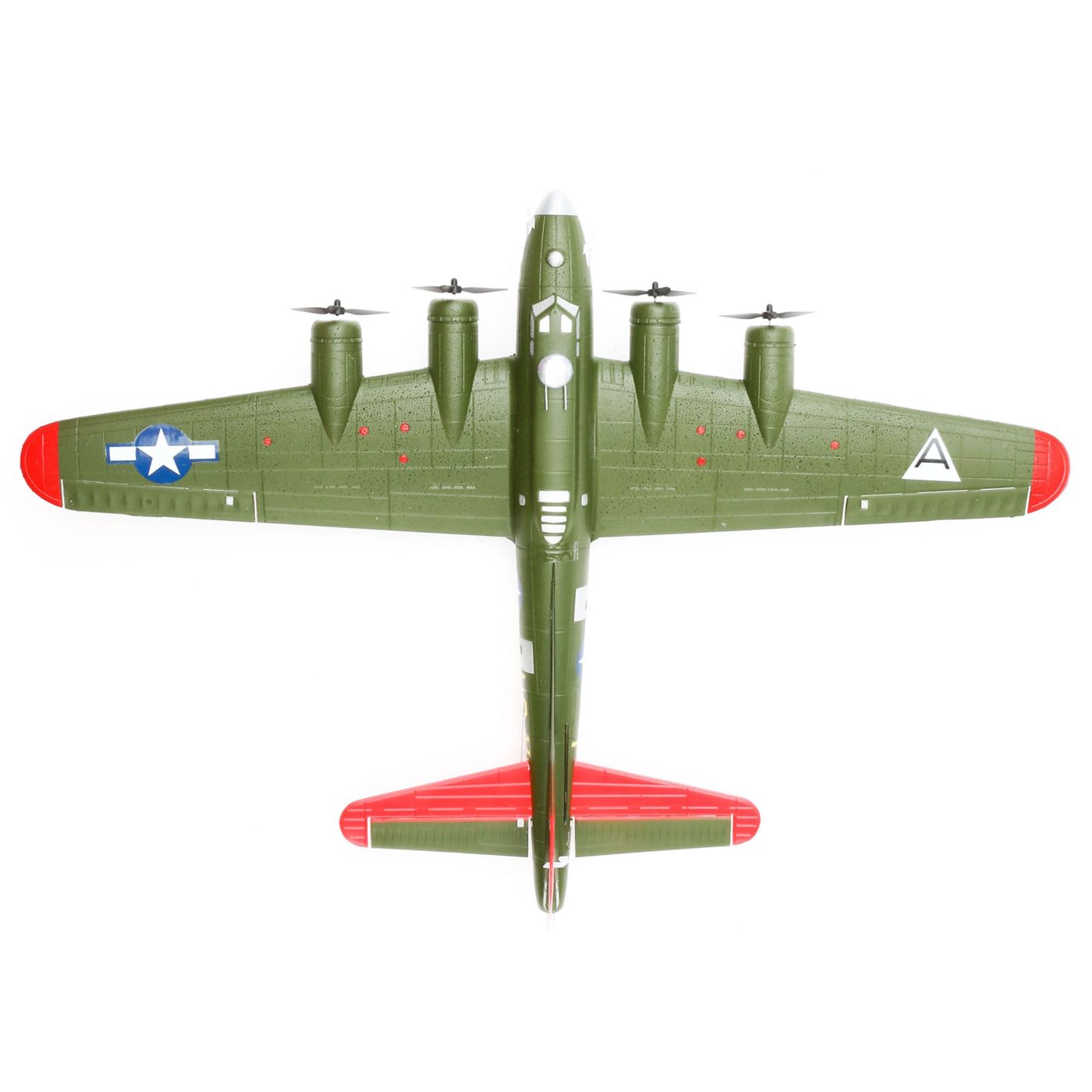 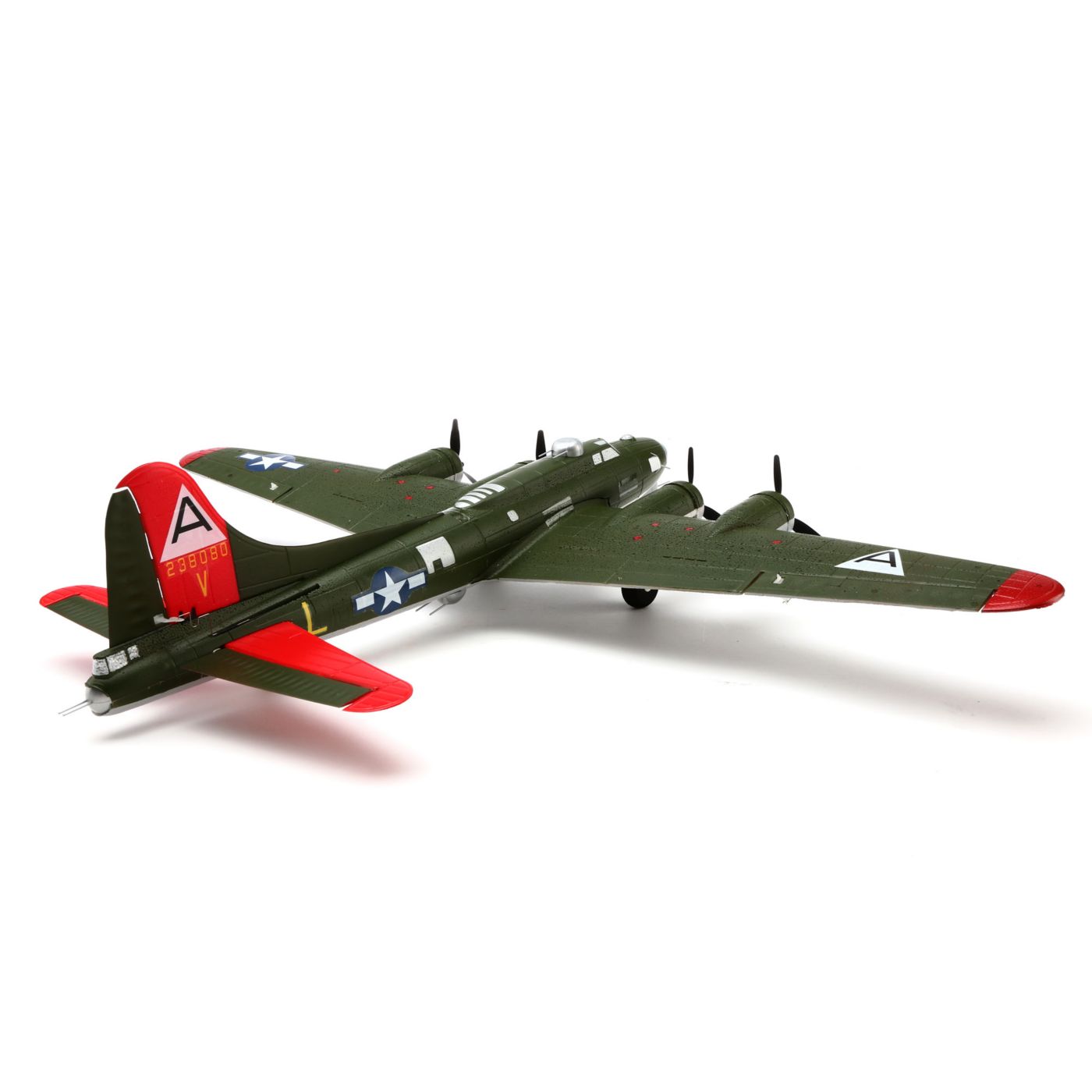 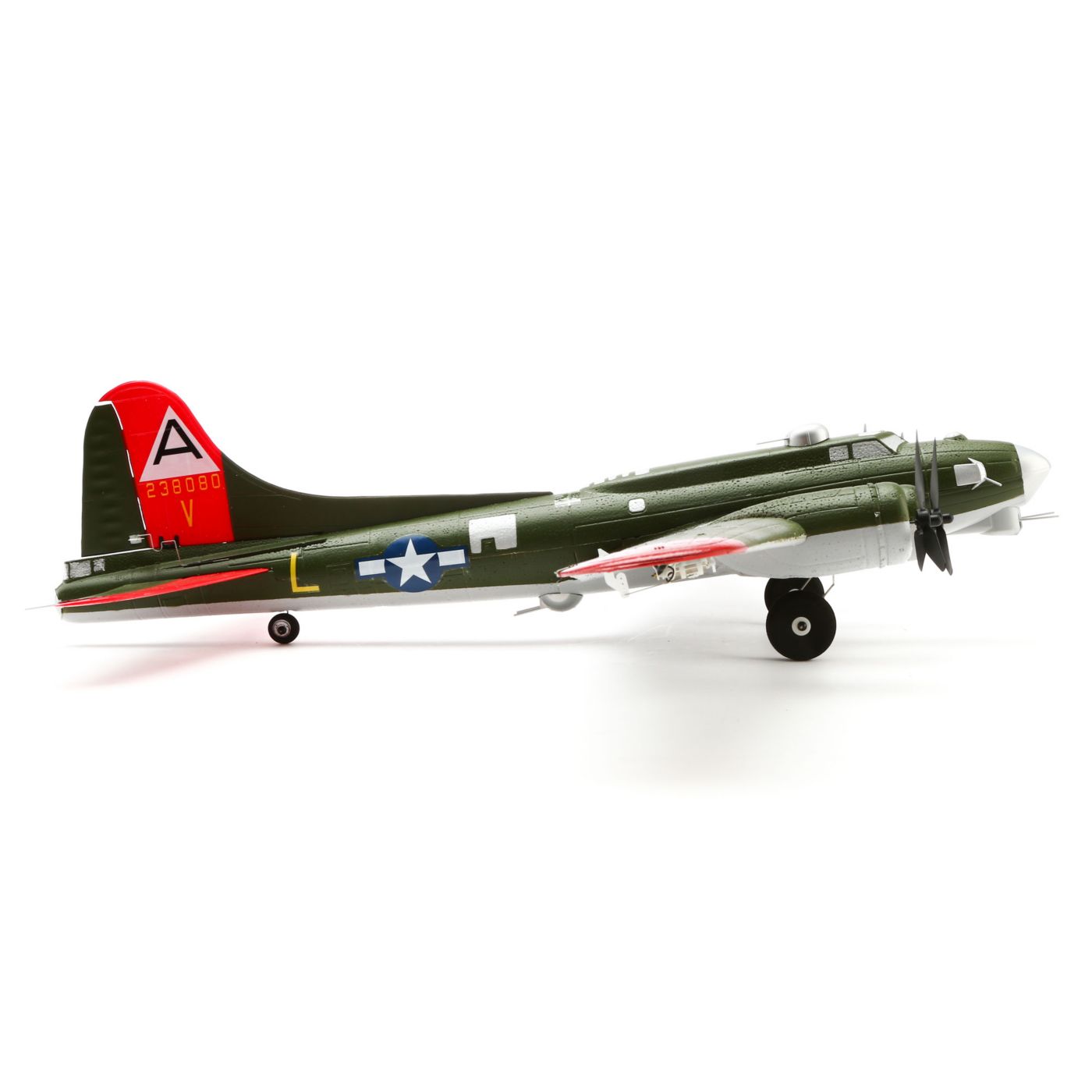 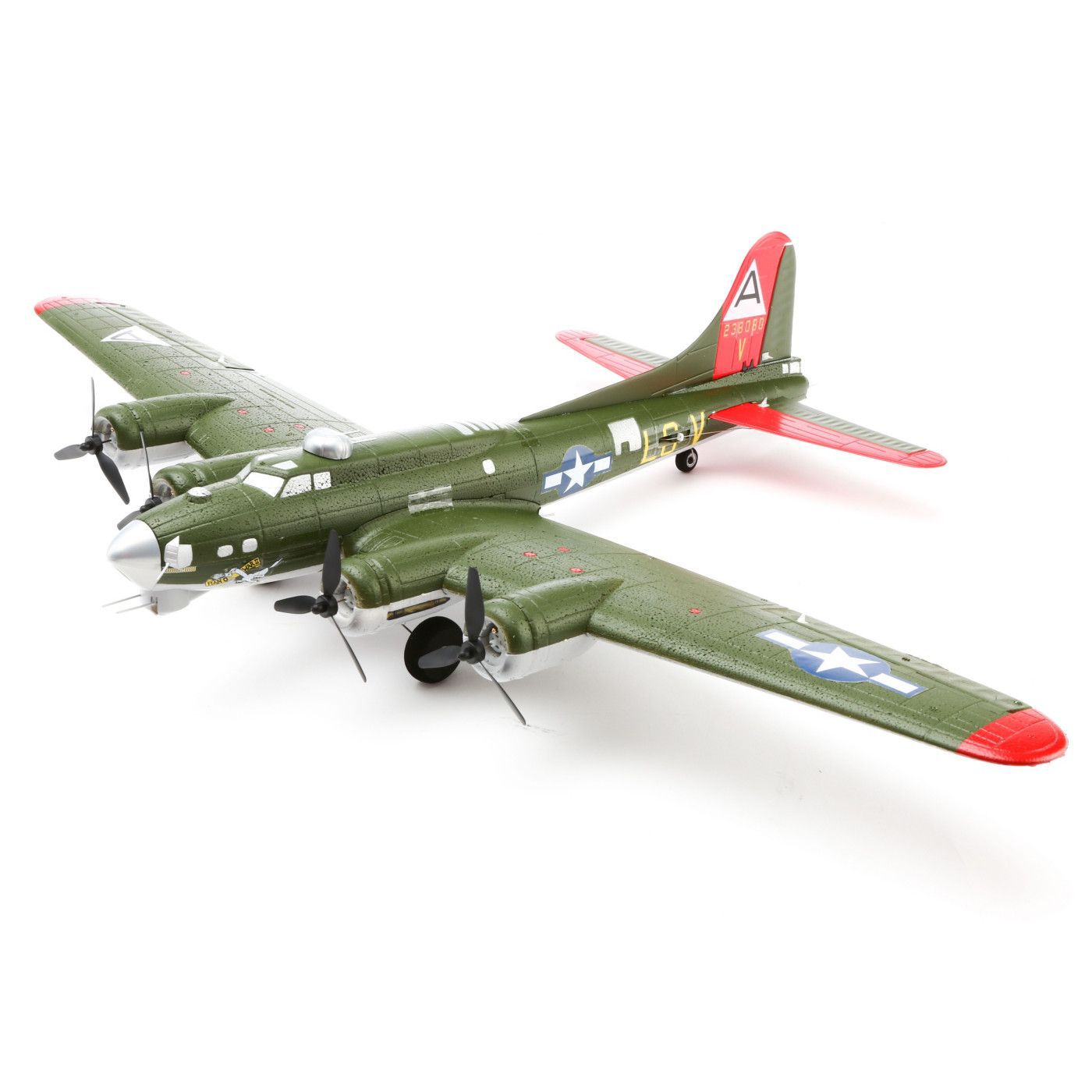 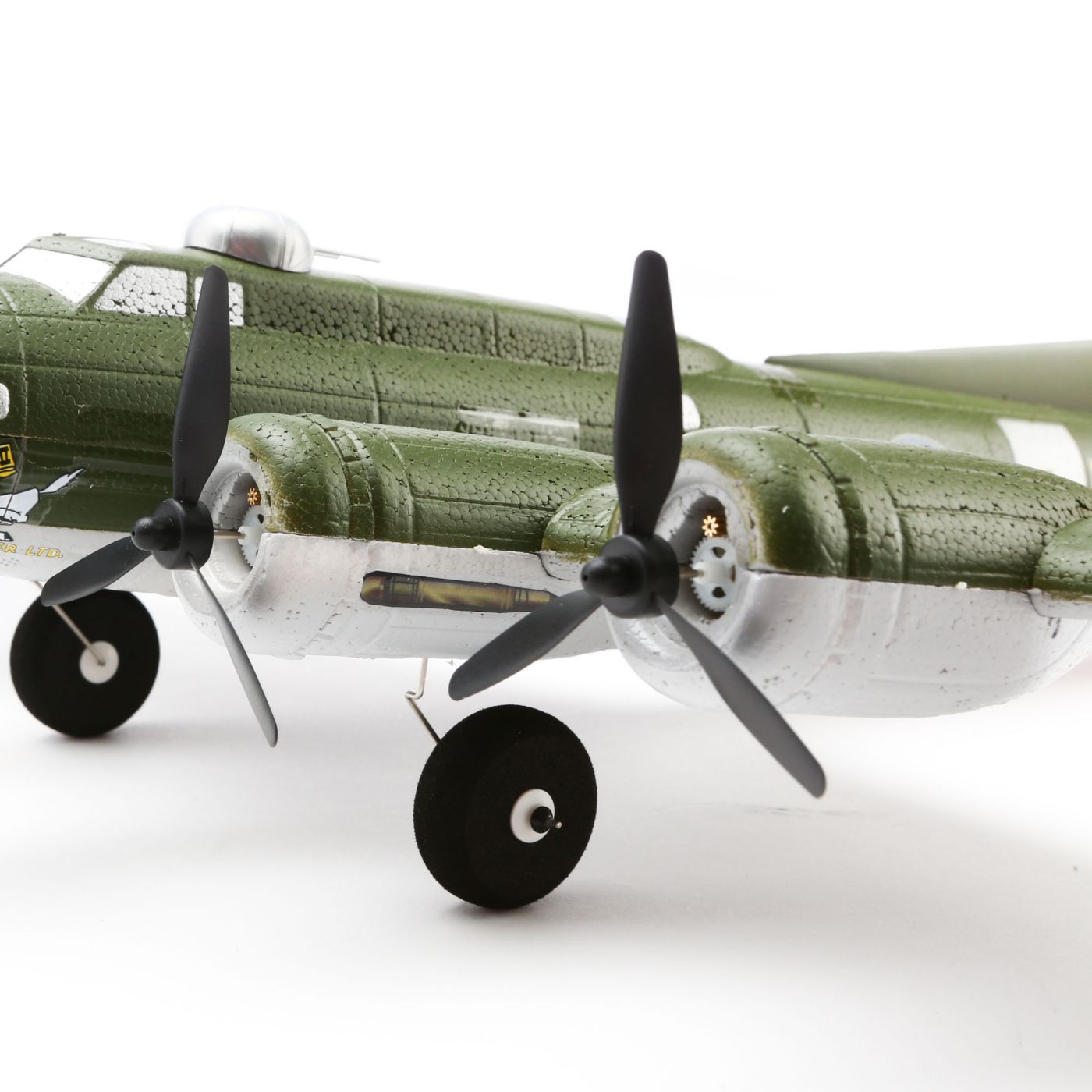 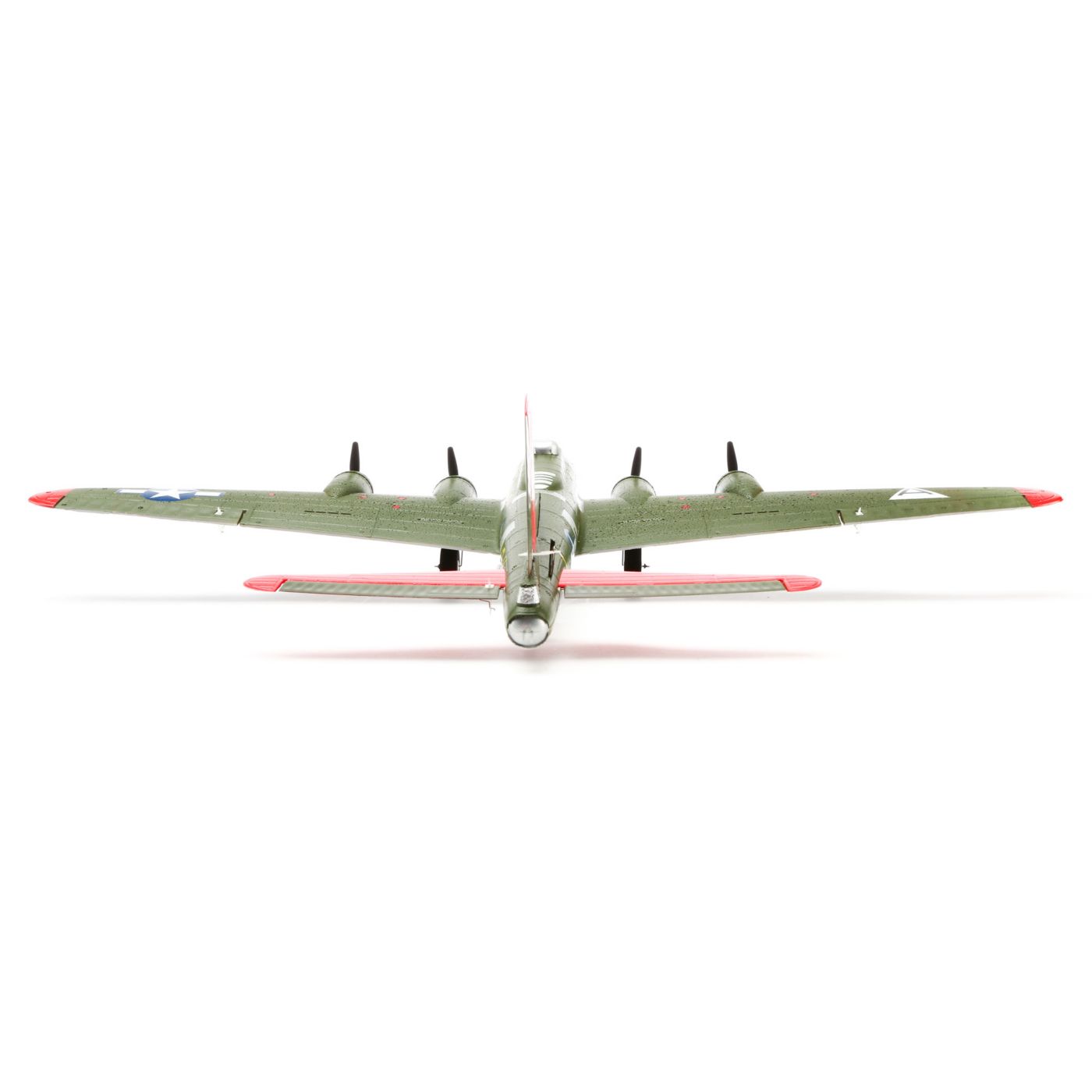 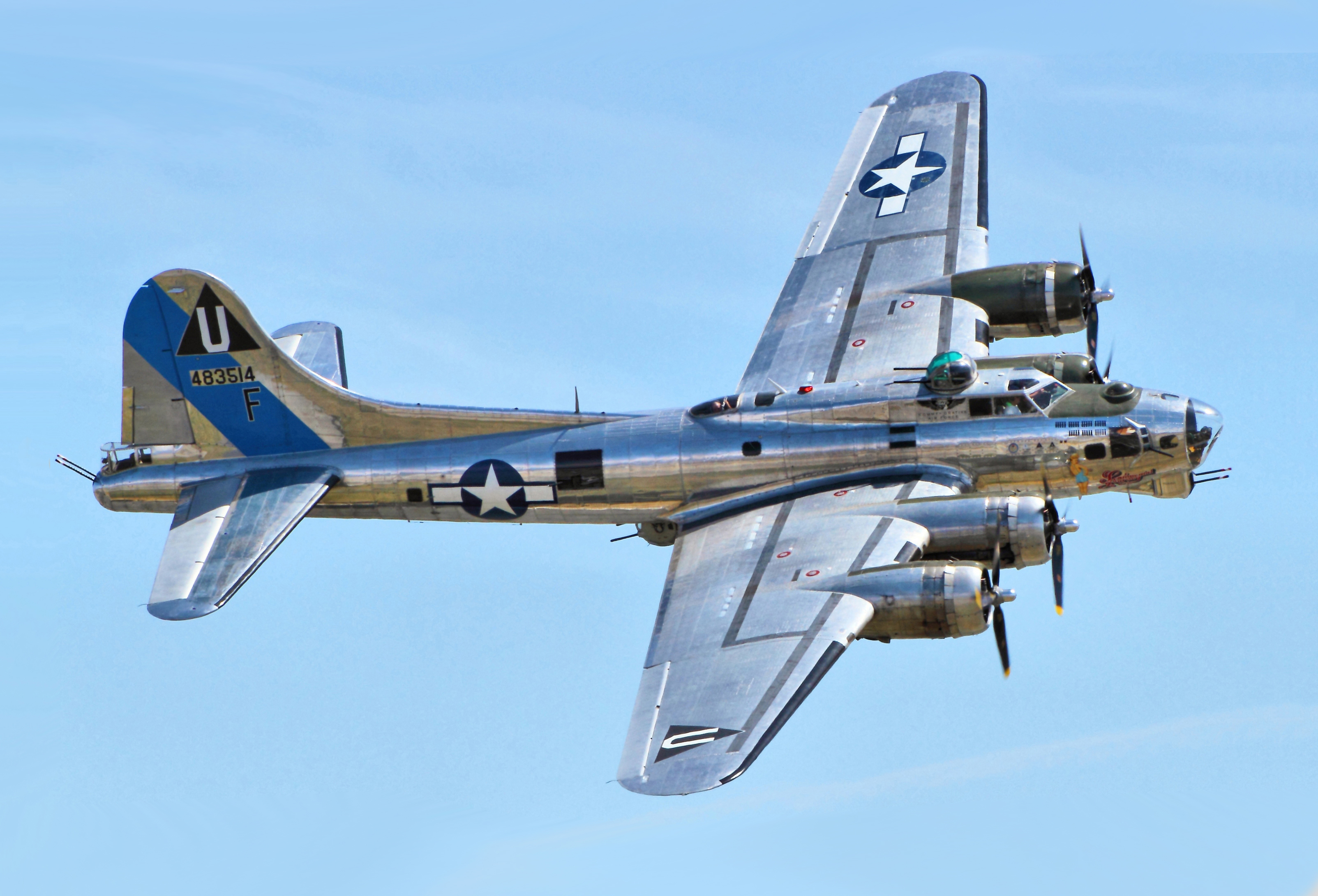 The Boeing B-17 Flying Fortress is a four-engined heavy bomber developed in the 1930s for the United States Army Air Corps (USAAC). Competing against Douglas and Martin for a contract to build 200 bombers, the Boeing entry (prototype Model 299/XB-17) outperformed both competitors and exceeded the air corps' performance specifications. Although Boeing lost the contract (to the Douglas B-18 Bolo) because the prototype crashed, the air corps ordered 13 more B-17s for further evaluation. From its introduction in 1938, the B-17 Flying Fortress evolved through numerous design advances, becoming the third-most produced bomber of all time, behind the four-engined Consolidated B-24 Liberator and the multirole, twin-engined Junkers Ju 88.

The B-17 was primarily employed by the USAAF in the daylight strategic bombing campaign of World War II against German industrial, military and civilian targets. The United States Eighth Air Force, based at many airfields in central, eastern and southern England, and the Fifteenth Air Force, based in Italy, complemented the RAF Bomber Command's night-time area bombing in the Combined Bomber Offensive to help secure air superiority over the cities, factories and battlefields of Western Europe in preparation for the invasion of France in 1944. The B-17 also participated to a lesser extent in the War in the Pacific, early in World War II, where it conducted raids against Japanese shipping and airfields.

From its prewar inception, the USAAC (by June 1941, the USAAF) promoted the aircraft as a strategic weapon; it was a relatively fast, high-flying, long-range bomber with heavy defensive armament at the expense of bombload. It developed a reputation for toughness based upon stories and photos of badly damaged B-17s safely returning to base. The B-17 dropped more bombs than any other U.S. aircraft in World War II. Of approximately 1.5 million tons of bombs dropped on Nazi Germany and its occupied territories by U.S. aircraft, over 640,000 tons were dropped from B-17s. In addition to its role as a bomber, the B-17 was also employed as a transport, antisubmarine aircraft, drone controller, and search-and-rescue aircraft.

As of October 2019, nine aircraft remain airworthy, though none of them was ever flown in combat. Dozens more are in storage or on static display. The oldest of these is a D-series flown in combat in the Pacific on the first day of World War II.

This article is an extract from the Wikipedia article "Boeing B-17 Flying Fortress", which is released under the Creative Commons Attribution-Share-Alike License 3.0 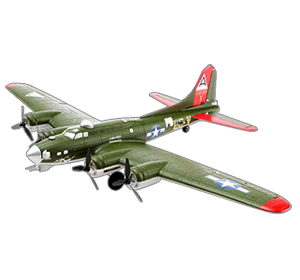 We cannot guarantee that the shops listed below do sell the UMX B-17G Flying Fortress in particular but at least we know they do distribute E-flite.