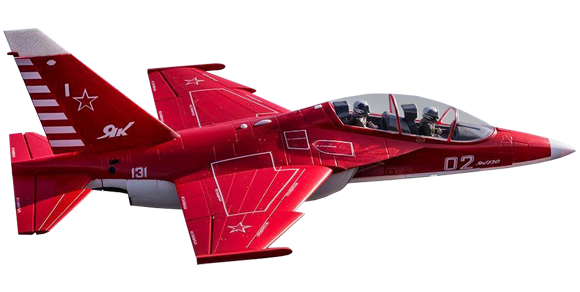 Introducing the Freewing 12 blade 70mm EDF Yak-130, the latest in Freewing’s exciting 70mm EDF 6s jet series! This aircraft delivers on so many levels and truly impressed us at the flying field. Finally, a compact and affordable model of the popular Yak-130 design with a range of features seldom seen in the 70mm format.

On the ground and in the air, the Yak-130 looks fantastic at any angle. The high visibility “Red 02” trainer scheme gives pilots a scale model which is still very easy to orient in the sky. If you’re looking for a change from gray military jets, the Yak-130 will certainly stand out from the crowd! A detailed canopy and high scale fidelity profile capture the unique lines of this modern jet trainer, and over 50 waterslide decals are meticulously applied by hand to complete the look.

Even beyond its striking visual appeal, where the Yak-130 truly excels is its performance envelope. Pre-installed flaps shorten takeoff roll on pavement to a brief ~75 feet, and with full flaps the model can land to a stop in less than 100 feet with a slight headwind. The stock PNP’s 6s power system propels the Yak-130 to speeds approaching 90mph straight and level and gives the aircraft nearly unlimited vertical. With its large vertical stabilizer, the Yak-130 can hold a rock steady knife edge or execute the most stable four point roll of any Freewing jet in this class. The stall is very gentle and slowly nose down, forecasted by a telltale wing rocking which gives pilots plenty of notice to power up.

The battery bay is spacious to accommodate CG with a 6s 3000-4000mAh lipo. For pilots interested in installing a 70mm 4s power system, we found that a 4s 4000mAh lipo is ideal for a lightweight setup. The simplified landing gear is durable, utilizing metal trunions and steel coiled struts on the mains for dependable operation on pavement, geomat, or very short and evenly cut grass. For the ultimate in a versatility, the landing gear can also be removed and the aircraft can be hand tossed and belly landed.

Assembly is very straightforward. The wings each attach to the fuselage with two screws and a primary carbon wing spar. The vertical stabilizer and horizontal stabilizer tail group is glued on; we recommend 5 minute epoxy. The layout still allows easy access to the elevator servos for adjustment or replacement. A neat feature we enjoy is that the wingtip rails are smartly sheathed in plastic, to ward against dings or scratches during transport or a tipped landing. The EDF is easily accessed by a removable hatch on the aircraft’s belly, and the ESC is kept secure in a channel along the inner spine of the fuselage to give it sufficient cooling without obstructing airflow.

Freewing’s 70mm Yak-130 offers pilots the perfect transition aircraft from 64mm/70mm into 80mm/90mm jets. We found the Yak-130 to be ideal as a first or second jet with retracts for pilots looking to gain experience and confidence before making the jump into larger models. Even expert level pilots will appreciate the fun flight envelope of this unique modern jet trainer.

Description and picture from MotionRC 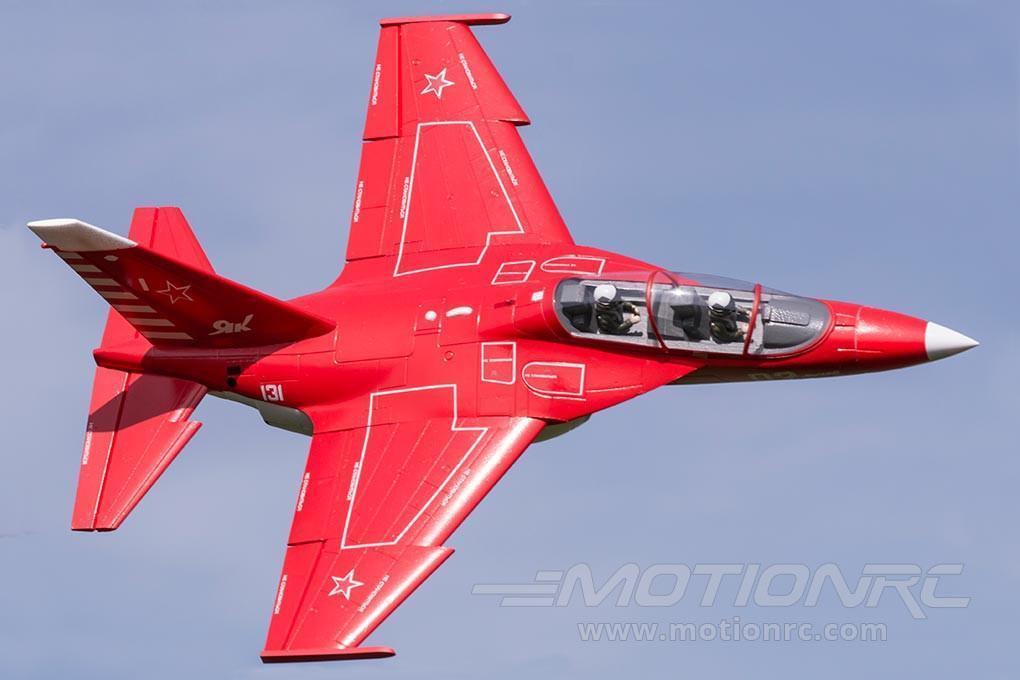 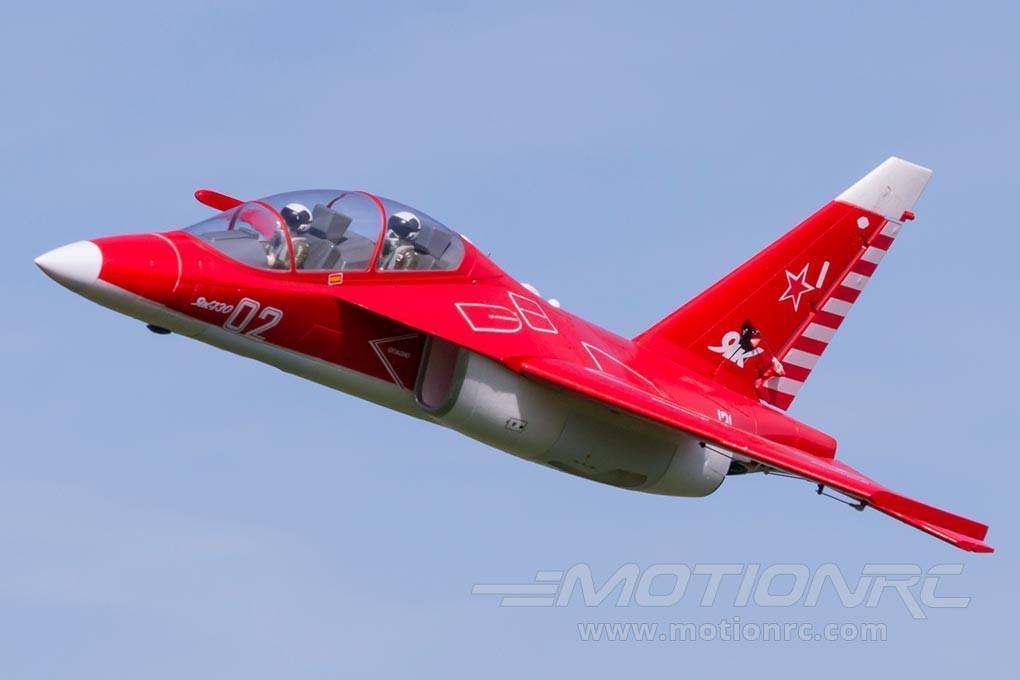 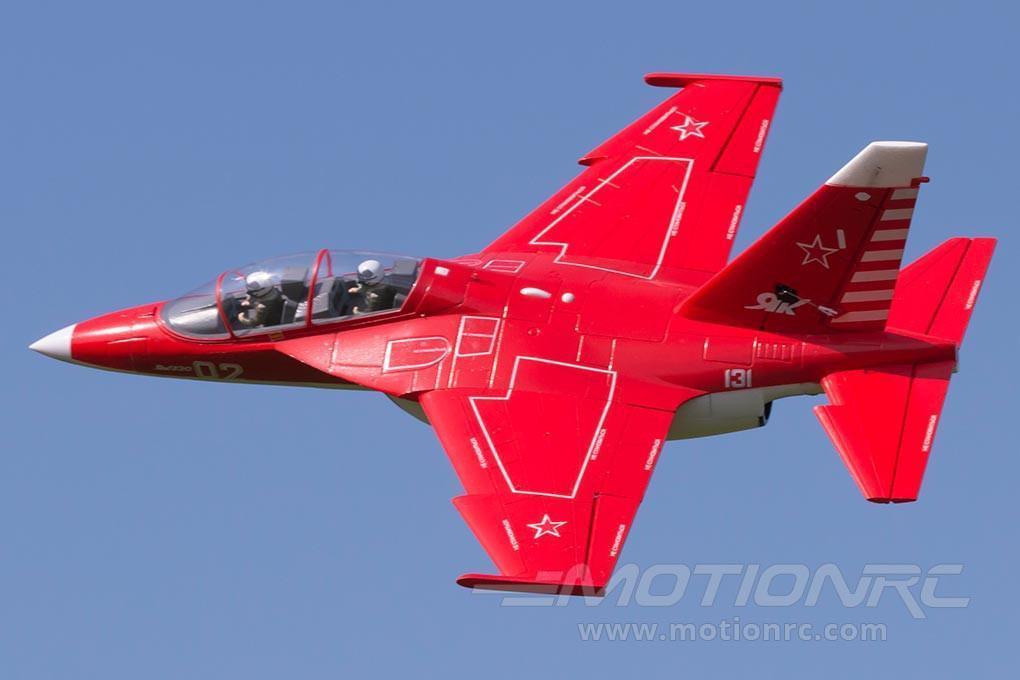 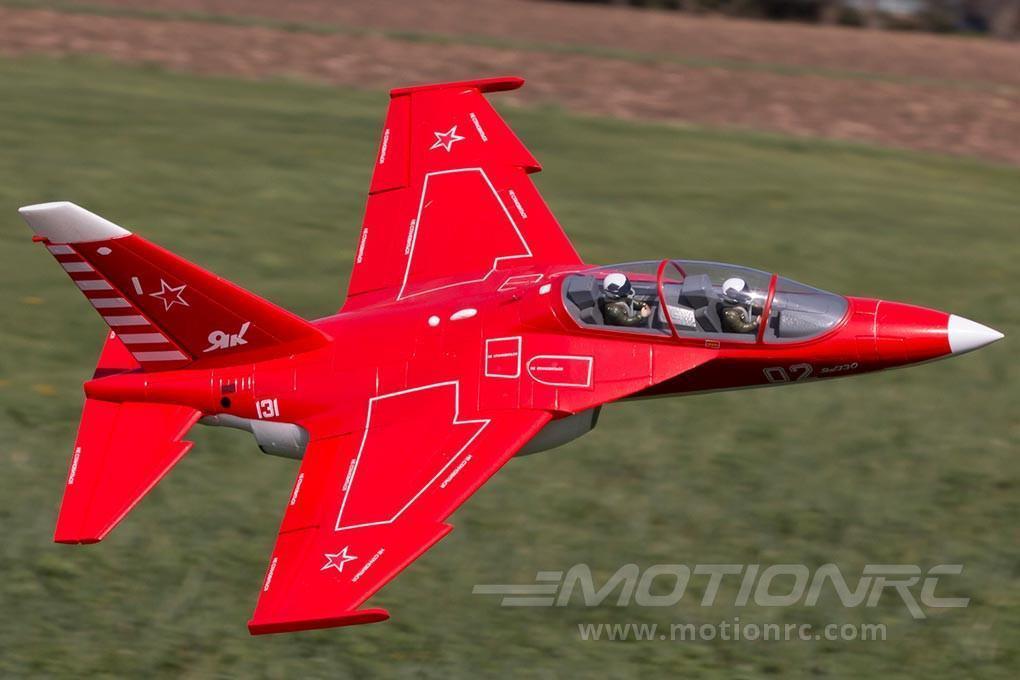 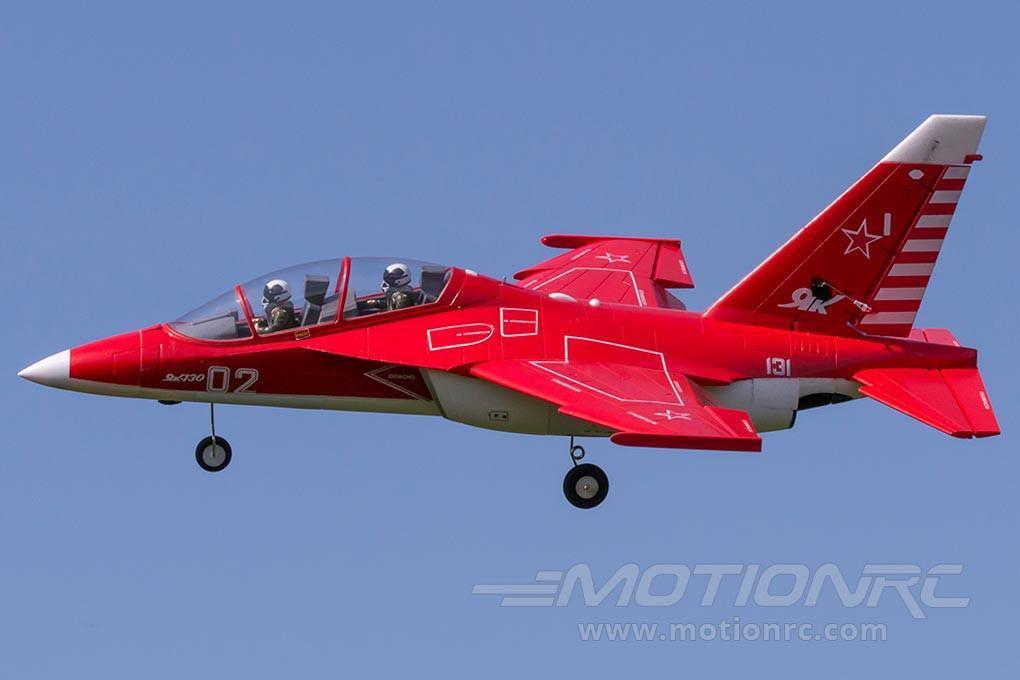 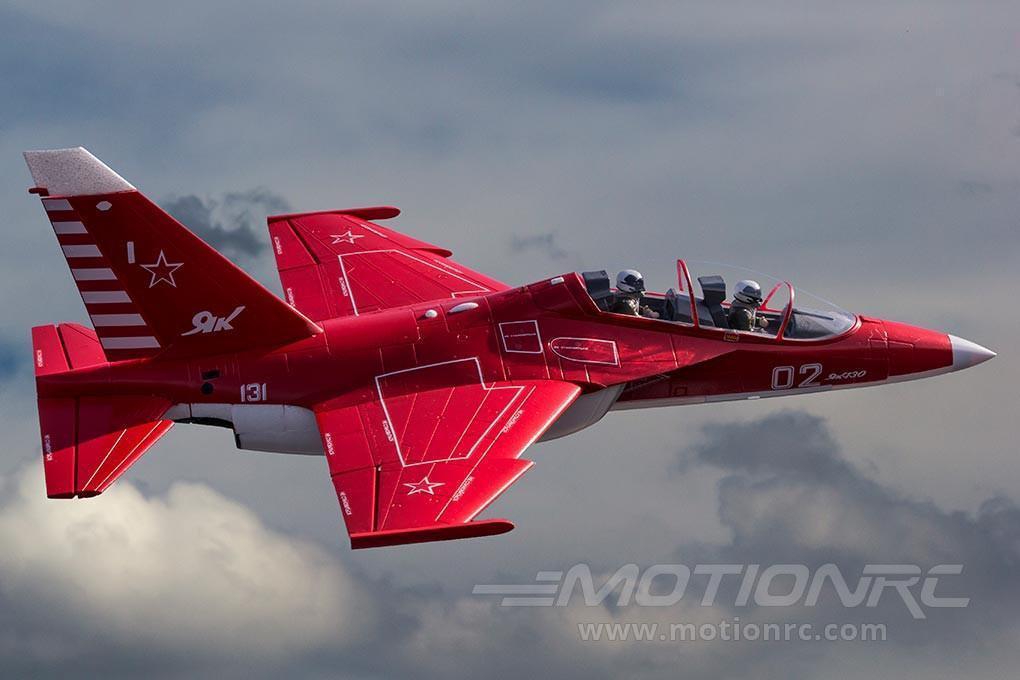 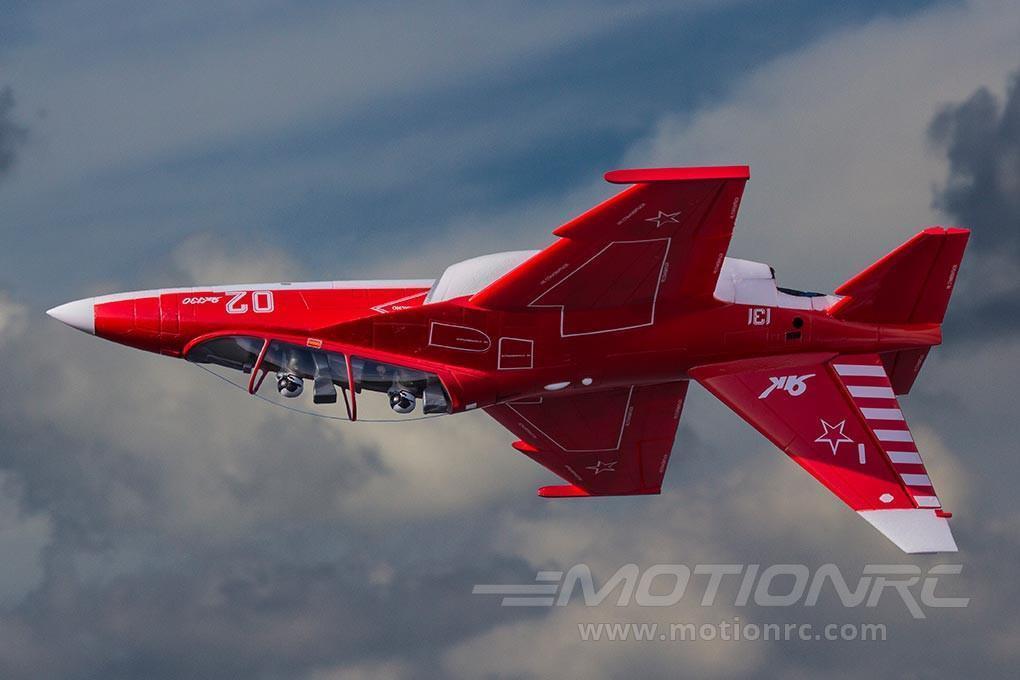 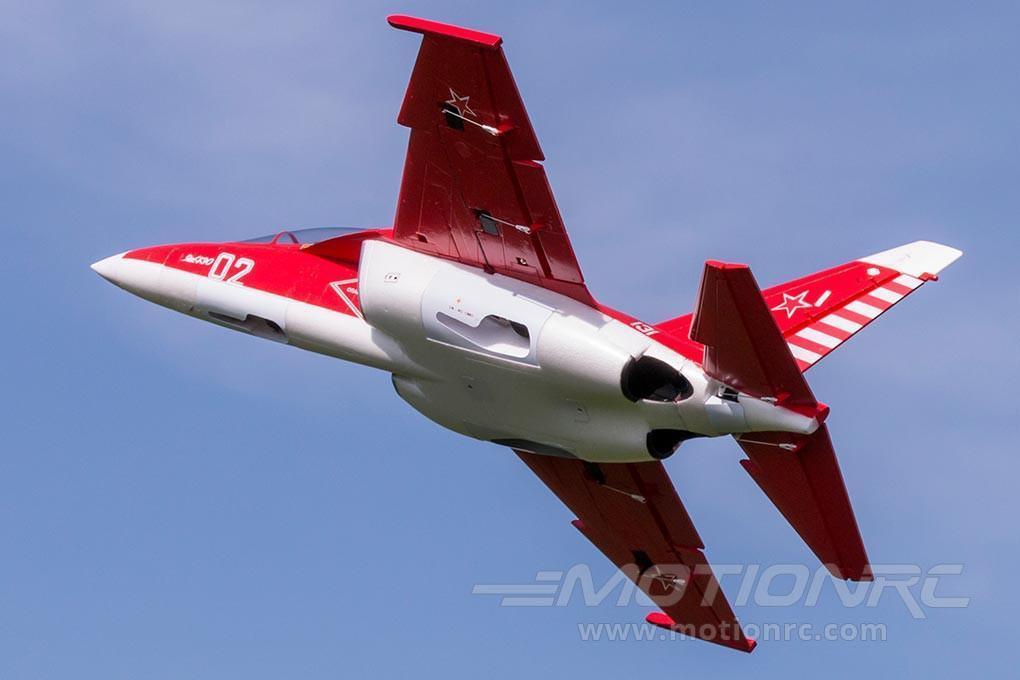 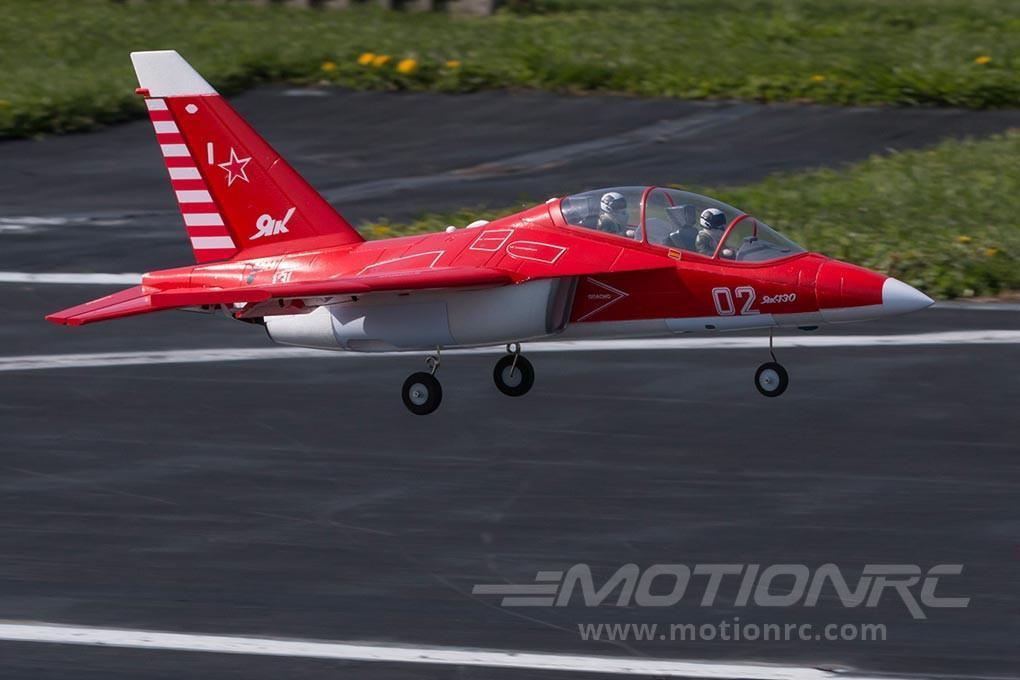 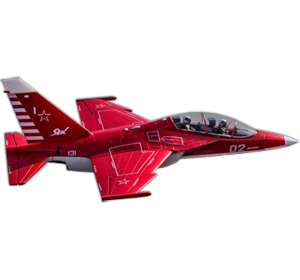 We cannot guarantee that the shops listed below do sell the Yak 130 in particular but at least we know they do distribute Freewing Model.