In the development of the CUMULUS XXL good-natured flying characteristics had top priority, and the model's fine handling is particularly noticeable on the landing approach, when the CUMULUS XXL can be flown very slowly, making it much easier for the pilot to achieve accurate landings. The model features full-length camber-changing flaps which can be deflected up as well as down, giving the CUMULUS XXL an unusually broad speed range. Deflecting the flaps to a negative setting (up) makes it possible to cover areas of downdraught quickly and efficiently, where as positive (down) flap settings enable the model to exploit the narrowest of thermals. For braking on the landing approach the ailerons and flaps can be moved to the butterfly (crow) setting, i.e. ailerons up, flaps down. The pack contains ready-built wing and tailplane panels, factory-covered in two colours. The V-tail can be removed to make transport easier. The CUMULUS XXL can also be converted easily into a glider, as the electric nose cone can be removed and replaced by the glider version, which is available as an optional accessory. The conversion is very easy to carry out. 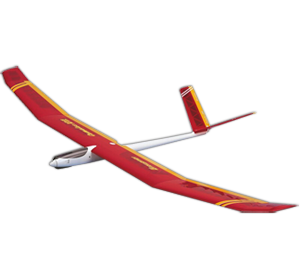