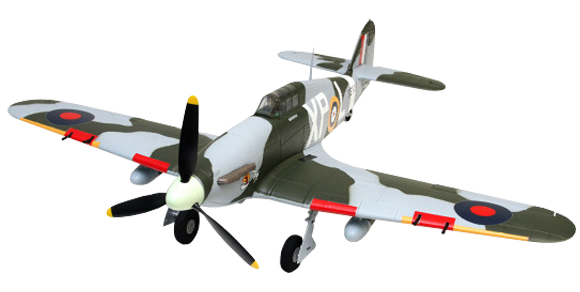 This H-King version of the iconic Hawker Hurricane, the workhorse of the RAF is manufactured in a superbly finished EPO foam and an authentic World War ll color scheme plus all the decals are pre-applied at the factory. The Hawker Hurricane comes with motor, ESC and servos pre-installed and also a built-in 6 axis ORX flight stabilization system to make it even easier to fly. The stabilization uses a 32bit MCU and a 6 axis digital gyro for ultra-fast control response, it can also be switched from beginner mode to expert mode.

The H-King Hawker Hurricane is based on an Mk 11B which was delivered to the RCAF in February 1942. After hostilities ended it changed hands a few times before being purchased by Hawker Restorations at Milden in Suffolk, England, and a full restoration was started in 2005. It made steady progress until the project was sold onto the Hangar 11 collection in 2007 at North Weald in Essex where it got completed in 2009. It was restored to a fighter/bomber configuration (nickname: Hurribomber) and the resplendent markings of BE505 which was a Manston based MK IIB operated by the 174 squadron.

But, the story doesn't end there for BE505!!! It was brought to the new Hawker Restorations facility at Elmsett next to the HobbyKing warehouse in 2019 to be converted into the very first Hawker Hurricane 2 seater. This work which includes dual controls took about a year and it was test flown at Elmsett at the end of the lockdown in the UK in May 2020. Once finished and the test program completed it was sold on to "The Biggin Hill Heritage Hangar" as part of their 2 seater Spitfire fleet. BE505 will continue to fly on the display circuit around Europe but will also be able to be used for training and pleasure flights, a new era dawns for this wonderful and unique airplane. The H-King Hurricane depicts BF505 when it was in the single-seater configuration before the conversion (see the picture above of the H-King Hurricane with the full size 2 seater taken at Elmsett before a test flight).

There is little to build with the H-King Hawker Hurricane, it comes mostly pre-built, and as mentioned before it has the motor, ESC, servos, and the ORX pre-installed. All you need to do is fit the main wing, tail assembly, and plug in the main landing gear. To complete the model you require your own transmitter, receiver, and flight battery, after that everything else is included.

It has the power to do all the maneuvers required for a World War II fighter and looks fantastic in the air. The stabilization system makes it very smooth and easy to fly and because of its size, it is perfect for local parks, large indoor areas, or the local flying patch. 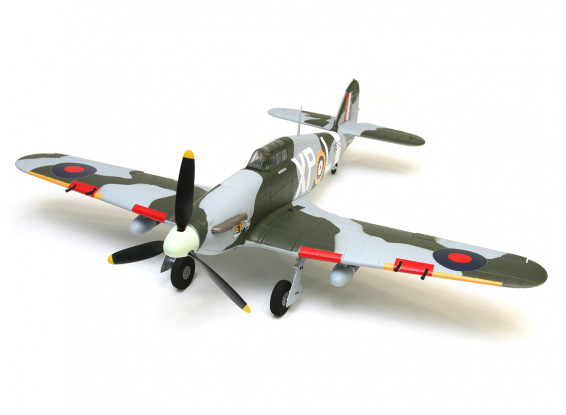 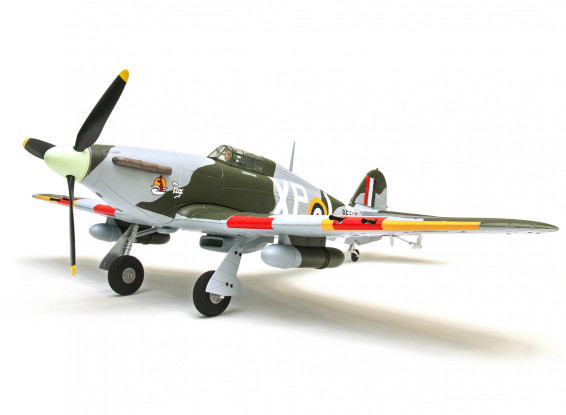 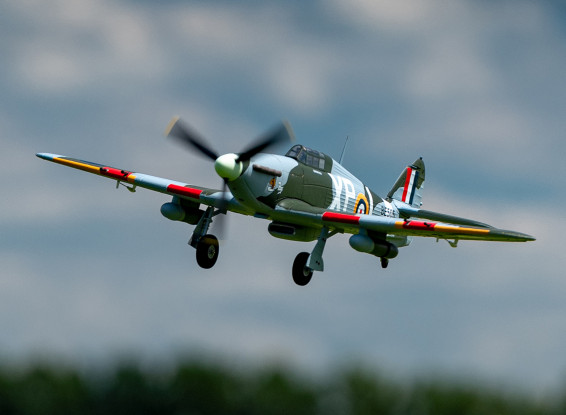 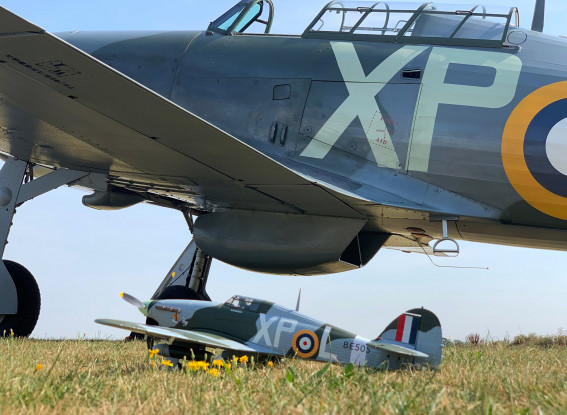 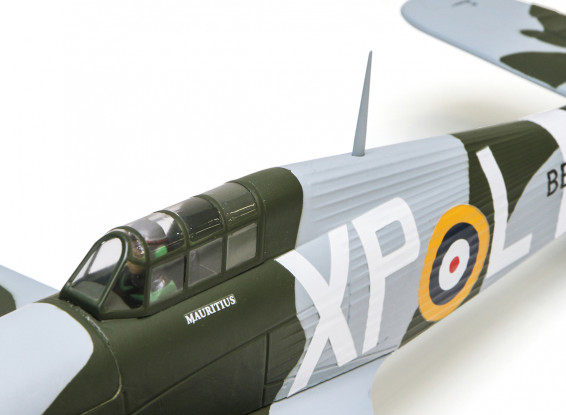 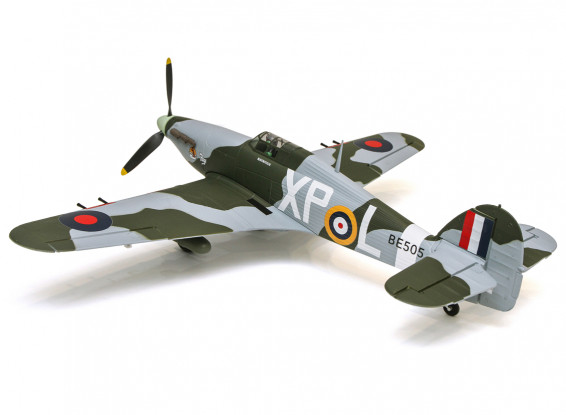 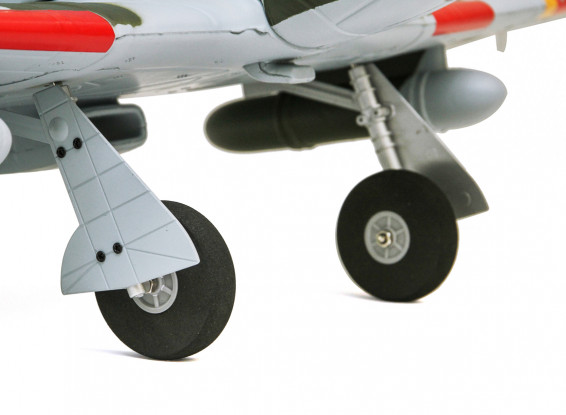 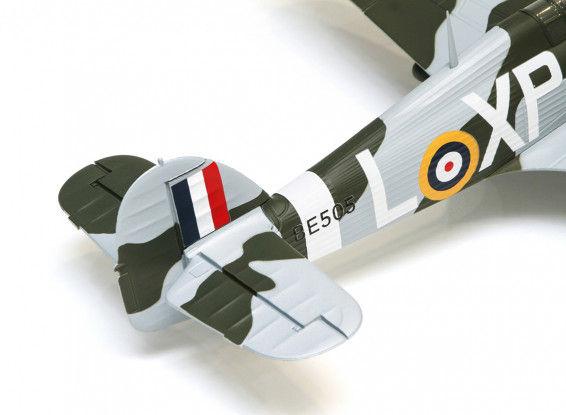 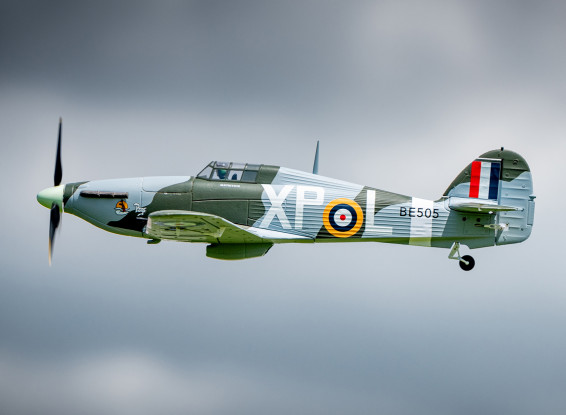 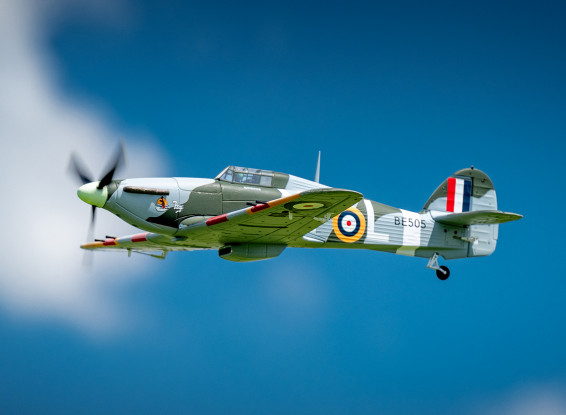 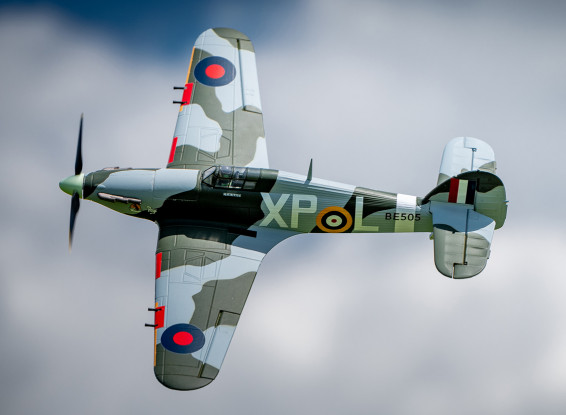 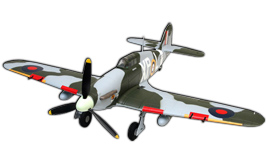 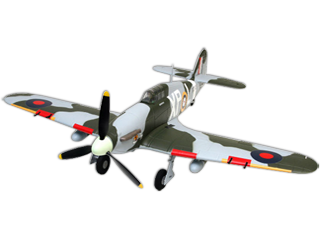 We cannot guarantee that the shops listed below do sell the Hawker Hurricane Mk IIB in particular but at least we know they do distribute HobbyKing.